This post describes a unit testing library for testing Windows Workflow Foundations.It is not a framework like HarnessIt, NUnit, or MsTest. Rather it’s a library that can be used in conjunction with any of these testing frameworks.

You can also just jump to the code.

Last September I posted this teaser entitled Unit Testing Coming to a Workflow Near You. My intention was to post this article that you’re reading now shortly thereafter when I got some free time to polish things up. In that previous post, I highlighted what I could determine to be the current state-of-the-art with regard to unit testing workflows, circa September 2008.

Then I heard through some inside sources that this MSDN Magazine article was about to come out:

So I decided to see what Matt’s article had to offer to the conversation. It’s a good article to be sure. It covers a lot of the things I thought were undiscussed and yet important to unit testing WF (e.g. using WF services as points of dependency injection for mocks and stubs). Thanks Matt! I don’t have to write about that now, but you’ll see it used in the sample with my library.

What I was really waiting to see was would that article make this post redundant? After reading it, I can say that there’s still a long way to go – and this library will get us most of the way there. Now let’s get to the good stuff!

That’s a pretty bold statement, significant advances: let’s see if I can back it up. Here’s what’s missing in one way or another from all the previous work on unit testing WF. (Please note that this discussion is in no way intended to belittle the work of anyone quoted above, just to build on their work and advance testing for us all).

Problems with unit testing WF today that are solved by this library:

Let me set the stage first before we see the test code. I have a somewhat realistic workflow which will exchange two stocks and either debit or credit your bank account with the difference. So you might want to sell 5 shares of Google and buy 10 shares of Microsoft and pocket the difference. 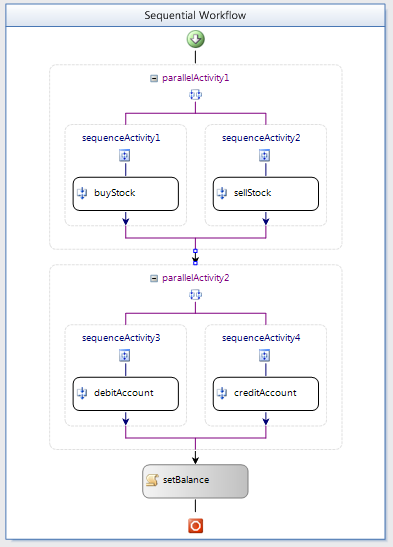 The first thing to test is the individual activities (like BuyStock and DebitAccount). Here’s the code to test selling a stock (some details omitted for simplicity, exact code follows later). This method uses my library class WfRunner for executing the test.

This test method (SellStockComputesCostCorrectlyTest) is remarkable for several reasons:

Just so you don’t think I’m trying to pull a fast one: Here’s that same listing with all the gory details left in. Notice how we’re using WF Services for DI with our test stubs.

That was pretty awesome huh? We solve several of our problems I identified above (testing single activities, references to the activity, waiting on workflows, and untyped name/value collections as input). The last one to cover is exceptions as success.

When we try to buy a stock and we don’t have enough money, the workflow will throw an InsufficientFundsException. This type is a custom exception created as part of my wf application – it’s not part of .NET. We want to test for this exception:

Notice that we’re using the ExpectedException attribute. We just call RunWorkflow as a regular method and we get the exception back as a synchronous error. That is fantastic already. But look at the call stack:

Running these tests inside Visual Studio we get all green!